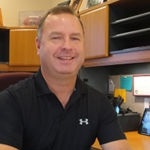 A co-owner of Don-Rick Insurance, Eric grew up in Baraboo and graduated from Baraboo High School and then earned a Bachelors of Science degree from UW Lacrosse. Eric served as a board member of the Professional Insurance Agents of WI (PIAW) from 2000-2006 and served as President in 2004.
He enjoys talking snowmobiling year round and is currently vice president of the Baraboo River Runners Snowmobile Club. He is married to his wife Ginny and they have two daughters. Outside of the office, Eric spends time around family, snowmobiling, anything outdoors and following the Badgers and Packers.